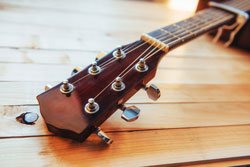 Let’s face it: you don’t want to spend money and that’s why you want to learn how to replace a guitar nut, so you can do it yourself. No worries, this guide will make guitar nut replacement as easy and quickly as it should be.

From removing the old nut, preparing the needed tools to positioning the right string spacing,  this guide will teach you how to do it like no tutorial probably would be able to teach.

Our goal is to get you to learn how to install a guitar nut by yourself, without the need of an expert guiding you, and without wasting too much of your time. Let’s get right to it!

A no-sweat acoustic guitar nut replacement that you can finish quickly will only be possible if you have the right tools. Here are all the tools to prepare: 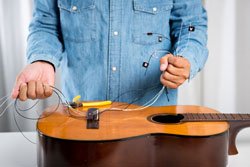 The nut on a guitar is hidden behind the strings, so you need to remove the strings first so you can get better access to it.

To do this, you must loosen each string’s tension using the tuning keys. Unwind all of the strings from its tuning post before pulling out the bridge pin.

If you’re having trouble with this one, use a pair of needle-nose pliers. Set these strings aside.

Using the tip of the craft or box cutter knife, you have to trace the finish around the nut’s edges to prevent the lacquer from sticking when knocking it loose.

Each of the nut should have a tracing that should meet the headstock for around 2-3 times its size. Doing this will also scrape off the glue for guitar nut used.

Be always careful with the blade, though. What is a guitar nut replacement if you no longer have fingers because you accidentally cut them off with the blade?

Step 4: Use the Wooden Block for the Nut’s Long Back Edge

Who would’ve thought that a wooden block you’re throwing away would come in handy for a guitar locking nut replacement?

The use of the wooden block is that you’ll place it on of the fingerboard against the nut’s long edge so it can meet the fingerboard’s wood. The block will have to be the buffer that supports the guitar when you start hammering it with the mallet.

The last thing you want when you replace nut on guitars is damaging the beautiful, sleek wood around them.

Step 5: Tap the Block Lightly To Remove The Nut Loose 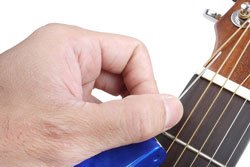 The best guitar nut fix method is the one that doesn’t damage your guitar, and you can do that in the next step by tapping the block lightly to set the nut loose.

Gently tap the back end of the block to hit the nut off the fingerboard until you have removed the old nut. Refer to this video on how to do that part: 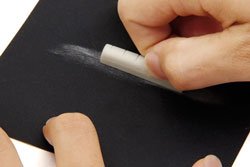 Now that the nut is removed, insert the new one where the old one used to be located. Try to adjust it to make sure that it fits snugly.

To avoid making the guitar nut too low, make sure that the strings are able to clear the first fret. This is also to avoid issues involving annoying buzz sounds when playing the guitar.

If the nut is too long or its end leaves off the fretboard, use the sandpaper to smoothen and shorten it until you’re happy with the height. Attach the sandpaper on the flat surface with the masking tape for better sanding.

Step 7: Secure The New Nut with a Wood Glue 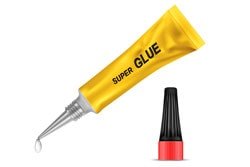 What kind of glue for guitar nut you’re going to use will dictate how tight your new nut will be. Stick to a wood glue brand known to be heavy duty and long-lasting but won’t damage the guitar.

A squeeze of about 2 drops would be more than enough. Press the nut into the slot with dabs of the glue and leave the bind for about 24 hours.

Avoid using a super glue since that would be hard for you to remove when you want it replaced it again.

You’re almost done, but not until you install the strings back. To do that, mark with your graphite pencil the areas on the nut where each string is to stick.

Then, you may now put the strings’ bottom ends back into the guitar bridge before securing them with the use of some bridge pins. Don’t forget to wind the ends of the top around the tuning posts and tune the guitar to its proper pitch.

So there you have it: you now know both how to remove guitar nuts and how to install a guitar nut in a few, easy steps that won’t even take an hour to finish.

As a brief summary, the steps would be to first prepare the tools, remove the nut carefully using a hammer and a block of wood, and install the new nut with the aid of a sandpaper to smoothen it.

Who would have thought that learning how to replace a guitar nut would be this intuitively easy and quick, right? Imagine the time and money you could now save from avoiding a guitar repair store’s service just with the help of this simple guide!