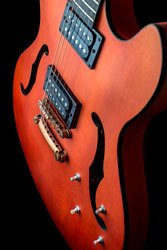 If you want to know about what is semi acoustic guitar, then you’re in for a treat. We have here for you a complete but short, non-time-consuming article to educate you about everything related to such type of acoustic guitar.

There’s a debate about semi acoustic vs acoustic guitar, and you can also learn the difference between the two hollowbody guitars in this article here, among many things.

Let’s get right to the meat of it!

The History of The Semi Acoustic Guitar

The history of such accoustic instrument dates back to the 1930s and it came about as a response to the demand for a greater volume guitar. Back then, it was a tricky way to balance loudness and clarity, especially in jazz bands and other concert orchestras.

Gibson was pretty much the first one that created the acoustic guitar made of semi-acoustic type. They called their first release of such hollowbody guitars as ES-150s or Electric Spanish Series.

Gibson made these guitars using the standard archtop as its basis. They added F holes on the soundbox area, right at the face of the guitar.

As a result, these semi acoustic guitar epiphones were set to fit in a traditional jazz band. Right now, it’s a guitar type for almost all genres. 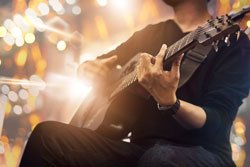 The main strength of semi acoustic guitars today is mainly appreciated for how it can render warm, clean, clear, feedback-free and crisp tones. The jazz genre musicians really dug how this kind of guitar expanded their approach on freestyling.

This resulted to increasing the demand and popularity of such semi acoustic guitars in the 1930s across jazz communities.

In the experimental rock era, these acoustic guitars design gave the 60s and 70s a lot of leeway to bring out the kind of tunes that took advantage of the negative feedback issues that these guitars usually delivered.

Some of the more popular artists these days who still are in awe of the functions of semi acoustics are Dan Auerbach of the Black Keys as well as renowned jazz guitarists, John Scofield and George Benson.

What are The Criteria To Call It a Semi Acoustic?

Guitars that have their solid body designed to be blank are semi acoustic. When routed to become a type of chambered body guitar, it will also be called a semi acoustic.

Models like the Gibson Lucille that have their bodies carved out to be semi-hollow will be called semi acoustic. The Brian May Red Special is another example of such type.

Guitars that have a solid core but have their bouts and soundholes already hollowed out (traditionally f-holes) will be called semi-acoustic. An example of this would be the Gibson ES-335. 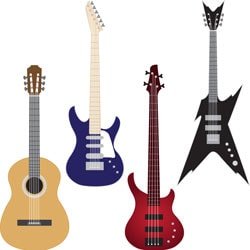 This is a common confusion. It also doesn’t help that online sellers of guitars don’t mind interchanging the labels in the product descriptions.

The difference is in this one: an electric-acoustic guitar is basically an acoustic electric guitar that has a socket installed for amps to increase the volume. These electric guitars can play effectively even if they’re plugged or unplugged into an amp.

Semi-acoustic guitar is much like an electric guitar, but it doesn’t really play as well when not plugged into an amp because some part of its body is still hollow.

This means that you can’t get the much needed volume of your guitar with a semi acoustic, unless you have it plugged into an amp. The advantage here is that you don’t get that much negative feedback issue usually suffered by standard electric guitars when plugged in amps.

The biggest difference to highlight between the two is the structure and density of the guitar’s body.

In an acoustic guitar, you get a more hollow body, and so you’re getting a deeper sound hole, producing better resonance. This makes it a lighter alternative than a semi acoustic.

You get a much thinner sound and sweeter tone with a semi-acoustic because it’s using a thicker wood. Either way, both types require an amp to give it the full-body volume you probably might expect from a guitar for a large-scale performance.

So there you have it: you now have a full-on, comprehensive bulleted list of details about semi acoustic guitars.

As a summary: you learned here, among many things, the difference between a standard acoustic guitar and an electric guitar versus a semi acoustic. You also gained a little glimpse of the history of the usage and evolution of such types.

If your fellow guitar musicians find themselves very well attracted to replacing their gear for this type, feel free to share with them this article on what is semi acoustic guitar, and get them schooled. Enjoy your day!